A question of community

I am very drained, very tired and I have a headache that’s been plaguing me most of today.

Tonight, Peter was sick so didn’t show up to do anything w/ Young Adults so Isobelle opted for everyone chuck a question in that we wanted to discuss and we’d pull one or two out and see how it went. It worked extremely well. The first two questions interrellated and the others that followed all in some way drew back to them – excluding the few plain stupid ones.

Community, suprisingly enough. Maybe it’s that time where it’s all drawn together with a little closure for me, I’ve harked on about the issue for over a year now – longer. I hope that the up coming camp ends up being very ‘community’ orientated, in simply the way camps do. The closeness that comes on camps is desireable but I’d like it to be continued.

I discovered something curious tonight, in talking about vulnerability and community. My whole aim of last year’s YITS was to discover that community type thing again – fairly sure I’ve talked about that. Yet my biggest issue last year was in vulnerability, it’s bizarre, which reminds me, I never did share my ‘mid-year’ camp experience. Perhaps it was Gods roundabout way of letting me know there was more than being just a group of people that wind up together. We have to be willing to give a little in order for it work to it’s best and fullest.

Putting yourself on the line is no easy thing. Sometimes its as big an effort to speak up when you don’t know what will come out of your mouth is even very comprehensible or worthwhile as it is to spill on some major life predicament. Trust, trust, trust.

I could say if we managed to trust people we might have more faith in trusting God, but I’ve always found it far less of an issue in trusting God then people. It’s a funny thing though, because if we are trusting God – shouldn’t we then have no fear from putting ourselves out there? Ahh roundabouts for the mind aren’t the best thing at this time of night.

Regardless of all the nargon jargon, please could you pray that I have a really positive time away, I think it might just even mean slowing down and getting that break. I’m a bit on the upper end of burn-out with a few things, I have no motivation and have been feeling pretty drained. This Solomons stuff too, for the situation over there but also for those of us who have to sit at home and watch as something we really do have close ties to falls apart. I thought I could do the whole bystander thing, but it hits closer then that.

Audio from the Age website by Rev. Kevin Rietveld (whom we know rather well) on the riots in Honiara.

I bet the Honiara Hotel’s burnt to the ground.

In my last post forgot to mention why China Town in particular has been targeted. Again it has to do with bribery and wealthy business owners – who are often Chinese. Quite simple really. Some say it might have been intentionally planned by someone in a power position. Whatever the case, it’s not good. Not many of our fellow SITAG’ers are over there at the moment, just the Ashely’s – the others are out in their villages and shall be staying there for sometime I should think. The Rietvelds are there but they live far enough out, I hope that for the sake of those of us over here that Uncle Kevin (not literal uncle) will continue updating Australia. 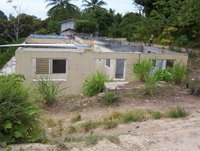 This reminds me a small way of what we dubbed Ground Zero (see photo) and the burning expats car on the way home from Emily Mudges, the day we had to get police escorted.

As said, it’s a different kind of violence this time. I don’t know how the Aussie troops are going to help things. More like build further resentment.

When politics screw with familiarities

“The public violence yesterday shows the public’s dissatisfaction over the election of Snyder Rini as the country’s new Prime Minister.”

“I can assure the people this country that my new government I will continue the programme of peace and reconciliation, economic recovery and sustain RAMSI in Solomon Islands so that the country will enjoy peace.”

“Honiara residents woke up this morning to find China Town in total ruins.”

I have been meaning to say something about Solomon Islands politics for a while now- however the names and the process confuses me so I’ve steered from doing so.

By this afternoon there will be more Australian troops making the three and a half hour plane trip to this pathetically screwed up, once beautiful, ‘happy isle’.

The election was as much of a concern before even the response kicked in. Solomon politics when it comes down to it, is nothing like Australian politics – perhaps some of the methods might be the same, but it is fraught with corruption. Bribery is a well known fact, and wantok business is abused from it’s usual friendly survival means. Loyalty is first and foremost to your wantoks – your clan, your relatives. If you are in some way minutely related or have some connection with those in power, you will vote for them (if you vote at all – it is not compulsory) regardless if they will do the country no good, loose the very minimal dollars poured into the place by the Chinese government or whoever it is “willing” to offer aid. Aid that undoubtably is heavily laden with political motives. You will vote for you wantoks despite it being against advice from the Churches who have been stressing upon the public to vote against corruption.

Of the three candidates up for Priministeral duties, two are known to be corrupt – one (the one just elected) was the finance minister and who knows what he’s been doing with the money that’s meant to be sustaining and failing the economy. The third was an unknown.

None of the few men and one woman (that I know of) that could’ve possibly set the country back on it’s axle made it so far as to even become a candidate. These are well loved, well known individuals, yet loyalties die hard and those that are illiterate (which is a significant proportion of the population) are often too afraid or unsure to vote.

Oh, and – did I mention that one of the candidates (not sure if it was the guy that’s been elected) is under scrutiny by the courts? Judicial systems take too much time.

I did not know what to feel when I heard about China Town. I am deeply sad about the state of the country and it could be a selfish thing, but a great many memories that could’ve been revisited have now been destroyed. I remember many trips to China town. The Bulk store, Passions cafe, The Hot Bread Shop, QQQ (which is still standing), infact some of my earliest memories of the Solomons are of the shell shop, which did close later in China Town. This also means the outlook from the Australian war memorial will be entirely altered, the street is gone, burnt, destroyed.

… oh look, I just return to the Solomon Star website and find this:

“The result of yesterday’s election was influenced by promises of large sums of money, a former prime minister has claimed.

Francis Billy Hilly told the Solomon Star some MPs were offered between $30,000 and $50,000 to cast their vote for the winning candidate.”

Why is that not a surprise?

It is a hard thing to stand by and watch your first country wash down the drain.

The Age has an article here.