There was a brilliant article in yesterday’s Herald Sun about three Solomon Islands Triathletes. Despite being rather Australian if push came to shove, I’d go for the SIslanders any day. I cannot find the article online anywhere, so you’ll have to contend with this pathetic substitute.

A year ago, the only three triathletes in the Solomon Islands couldn’t swim properly. On Saturday, they completed the Commonwealth Games championship course – albeit in the last three places.
Stanley Ofasasili, Wilfred Bosa, and Marcus Farau were trained by volunteer coach Ross Andrewartha, an Australian expatriate.

“The islanders are naturally great in the water and they’ll never drown – but they couldn’t swim,” said Andrewartha.

Conditions in Melbourne were in stark contrast to the Solomons – there, the three run in bare feet over gravel roads, ride decades-old bikes and swim in the ocean on a course marked out by beach balls wrapped in orange plastic.

Cheered on by the crowd, Ofasasili finished 30th in the 32-man event – almost 39 minutes behind champion Bradley Kahlefeldt of Australia, who clocked 1 hour, 29 minutes 16.33 seconds.

After crossing the line, Ofasasili hugged Andrewartha and exclaimed “I finished!” Farau finished 31st and Bosa was last in 2:36:15.71…

I think in a way I am quite proud that they actually had the guts to get out there. Honestly the last article was so much better. They came with no sponsorship pretty much, one guy was practicing on a 25 year old bike. Doesn’t suprise me. 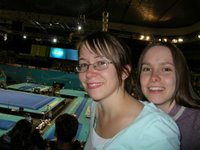 The article also mentioned how the Solomons was the poorest nation in the Pacific. I am again not surprised as I’m fairly sure the nation is in massive debt. It calls into question “Commonwealth” really. Sponsorship for three guys is a very small ask.

aside from all that…. last night:

It was most excellent. Facinating and I was mightily pleased I had my mp3 (that is radio) with me, so I got commentry – which was more than what the others got. Hannah and Laura fought it out over the spare headphone which I was nice enough to share. 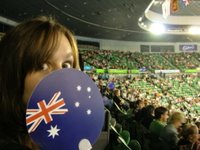 So Rod Laver. Artistic Gymnastics turns out to be all the apparatus, which was great. We had excellent seats, closest to the beam and vault. Floor was easy to see, the bars were a little further away.

Everything runs simultaneously so its very interesting. The Aussie girls wore bright pink so they were easy to spot and between the two of them they managed to score a Gold and a Bronze. 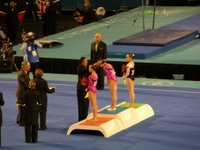 So many falls and it came to a tight finish with Chloe Sims (AUS) and Elyse Hoppner-Hibbs (CAN) with the exact same score. Some tie breaker rule, sealed their fate in Australia’s favor. 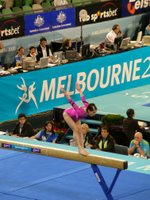 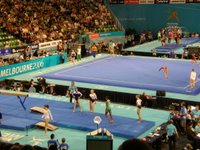 Before I do any explanation whatsoever about last night, important news must be shared.

I have a car! A 1986 Corolla CSX hatch (seca? however you spell that). For $900. Of a guy needing to get rid of it fast as going overseas. Needs a little work. No roadworthy, no rego and done a lot of km’s. But otherwise in pretty good shape. I wont be driving it for a while as Dad’s heading off overseas. My uncle has kindly volunteered to put it in his factory and get it all up to scratch so should be minimal $’s. The car was originally priced at $2000 (with Rego) and without was dropping to $1500… but then Dad did his negoitating which didn’t really take much. He should’ve asked for $800 😛 I don’t think the guy knew too much about cars he seemed like a decent kind of guy though.

So it’s a bit of a bomb 😛 It was always going to be. It has got power steering. Hasn’t got fantastic guts, but it’ll get me from A to B when it’s roadworthy.

This is very good.

oh, and the all important colour info: RED
and no I don’t have a photo for you yet.