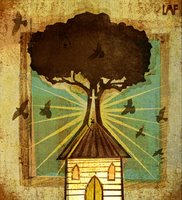 I’ll be selfish, this one is really here just for me as a reminder.

Uni and the markup language

Well, hello from uni. I’m in the Studio killing time until my next class – that being “Foundations of Design”, a new subject which I apparently missed the first class pf (which I thought wasn’t on last week as it’s only a tute/workshop).

This morning held both the lecture and the tute for WWW and the Internet. I sat in the lecture and watched Huw draw a rather good characture of the lecturer – that’s about as interesting as it got. Turns out Chris Memory (was at my school the year down from me) is in that class, gave him a wave.

The tute was alright. I don’t know if I’m an immediate fan of how the whole thing proceeded – the tutor is a little hard to understand accentwise, but I’ll get there, and a lot of it seems like, “Open up DSO and work through the prac given”.

So I survived some exceptionally basic HTML excercise – the girl beside me cried because she couldn’t get it :S A vague intro to some java and php. Not that I really have worked out or can remember any of the latter two. The idea of the tute was obviously the ‘simple’ stuff – so I got of of there about an hour early after Justin came over with a cheery hello and a ‘have you decided what you’re doing for your system’s assignment yet’ in his typical fashion. No.

I went and bought the text book for WWW straight away as I should’ve had it there. Goodbye $117 or so. Thrilling! Had a brief look at the ‘optional’ other two for Systems. They looked horrendously boring and ridiculously expensive so I passed. It’s the Library or buy when absolutely necessary. They shouldn’t make textbooks so expensive.

*The programming text book is pink
**I found another BIM student who come from out my way. Caught the train back with him (Matt) He has the most unusually square jaw I have ever seen in my life!