Working in a bookshop you don’t intend to get sucked in by certain titles and you don’t have much time to read blurbs, but a mental ‘must get’ or at least read list starts building.

Mine looks a little like this at the moment:

Haddon, Mark – The Curious Incident of the Dog in the Night-Time
This is not so much a kids book, Dymocks keeps it in the Literature section, it’s meant to be brilliant. I’ve had my eye on it for months and months now. 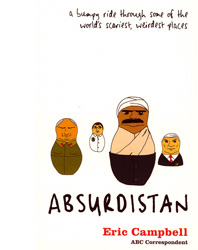 Campbell, Eric – Absurdistan
Back in 200x around the time all the ‘War on Terrorism’ stuff came up I kept a close eye on the news and made a mental note to keep track of one particular journalist. This was short lived when I picked (Eric Campbell – I’m fairly sure it was him) and the following week his camera man was blown up by a suicide bomber. I confess I gave up the idea following anyone after that (was a bit put out, and minorly disturbed). I would very much like to have a read of this one.

Martel, Yann – Life of Pi
Again another that has been lurking in the background for ages.

Heller, Joseph – Catch 22 maybe
Nabokov, Vladimir – Lolita(questionable that I attempt this one, I’d like to one day if I feel brave 🙂 really do the girls wandering around Eastland with pink Lolita bags have a clue of where the name has come from! :S)
Behrendt, Greg/ Tuccillo, Liz – He’s Just Not That In To You I would like sincerly to read this book. I read a small proportion when I was in Borders one day (yeh, traitor!) and a lot of it is full of crap but I want a ‘non Christianese’ view on relationships. Again it would be interesting.
Smalley, Gary – The Five Love Languages I don’t think I’ve ever read (if I have it was ages ago) the actual Love Languages book, always the alternate ones ie: Love Languages of God, Teens Love Languages or similar.
Pax, Salam – The Baghdad BlogI mean why not! You can read it here I think.

I should read something by Oscar Wilde and hmm… I wouldn’t mind a book on Body Language as that would be quite facinating.