That’s two days in a row I haven’t done a post every day, be proud! Maybe I’m not addicted to this thing.

In reality, my life has been too full, too busy, too frantic that when I reach the, Get on the computer’ time my brain screams in rebellion and I sit on the chair staring at the screen deciding slowly what to do eventually realising that it’s stupid to waste more time in awake mode.

I have not really stopped once this week. I had to work today which I was rather miffed about and will refuse next time, I have told them I don’t want to work Sundays but they, “Really needed me” and I couldn’t work either Friday or Saturday. I made it to church for the first forty minutes, left after communion. I was rather glad that I could make it for that, as it only happens once a month opposed to the once a week of my old church. I think I might wag uni tomorrow to regain a bit of sanity and get myself organised. I should be slightly concerned, it’s what, week 5? of being at Deakin and I haven’t done my normal J thing of getting organised early, my room testifies to the same fact. I think I need to slow down. I think I’m also getting a bit sick. 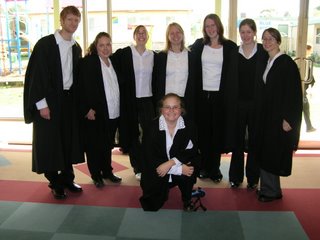 Graduation was yesterday. We had to be there by 11am to get all ‘gowned up’ for the 2pm ceremony, we then weren’t allowed to leave the property for some reason – which left 95% of us lunchless and not all that happy. We ran through a rehersal and they got us all sorted for the group photo which I’ll get one day ‘courtesy’ of the College (or the $90 course completion fee I paid months ago).

It was fantastic to see almost everyone and I say that only because a few didn’t show up. The photo on the left is of a few of us hanging around killing time between getting ‘dressed’ and practicing. I felt very Harry Potterish (well, Hogsworthish) wandering around in a ridiculous black gown that had arm holes enough for four. 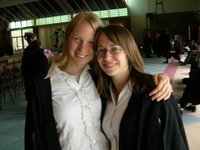 Katie and Jo, oh was I glad to see you both! It’s always funny how you don’t realise how much you appreciate peple until you suddenly see these friends who you haven’t seen for quite a while.

(On the left is the lovely Samantha and myself)

Jo said the accademic gown really suited me :S Yes thats right I plan on doing it at least 5 times. Ha yeah right. Well I’m getting there, two certificates so far and a bit of a degree.

So we ploughed through the formalities. The speaker they had was good and went quickly and was reasonably interesting which helped things immensely. They did all the awards first, accademic and all that. The only YITS awards given out were two honorable mentions, that went to Kat (Ringwood) whom I guessed would get something, Luke (Ocean Grove) and the actual award was for the all rounder person who ‘opitimised’ what the year was about ie: growth, involvement etc. it went to Dan (Berwick) which was cool, because that means I can be cool by association *cough grow up Rebecca*. Good on him rather 😛 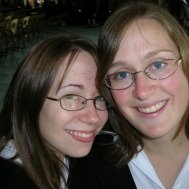 ‘So I’m certified now in Youth Development, whatever that means. (photo: Bec and Jo)

We inundated the Caf back at Tabor with chairs and YITS’ers and laughing and food after we’d escaped the afternoon tea congratulatory period. We should’ve clapped Rowan. hmmm.

The last lot of us hung around until 8:30, where we then went on to Jess’s to prolong the frivolity. A lot of talking, some Arrested Development, some massage lines and munchables kept us going for the next few hours. Then home, exhausted and happy.

Thats that. The last of anything vaguely offical Year in the Son wise. What a way to spend a year!