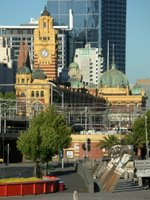 It seems that the city and I are becoming companions over these few days ‘off’.

I went in today to take photos for my Urban Landscape assignment however I made the mistake of not having much of a plan. The images are in some way meant to fit together with you chosing from one of three categories, people, architecture, abstract – that’s me paraphrasingin the briefest possible sense. I wanted to do people but it wasnt too possible so I opted for the buildings/architecture one. I have come home with not much of a clue of what I actually took. Real smart Rebecca.

I ended up spending most of the afternoon hanging out with Paul. We wandered into Kings Domain to see if we could find the fire that claims ‘sacred ground’ by some non-melbournian Aborigines. It took us a while to locate it as we came in from the wrong spot, however eventually spotted a police car and so aligned ourselves and found their base camp. I did not use my camera. We also made it up the the Shrine, which I don’t think I’ve ever been to before so it’s probably a good thing, being Victorian that I now have. I’ve been to many other war memorial type places in my life but never the one in the ‘home’ location. It was alright, not as interesting as the Canberra one, the view from the balcony over Melbourne was fairly excellent.

A good afternoon, although I eternally fail to understand myself when I have those days where my thoughts refuse or do their worst to not make it into words – I can be entirely comfortable with who ever I’m spending time with, but just not be overly sociable/chatty. (Sorry Paul!)

Tomorrow morning I treck inward again, to use up the next film in the Queen Vic Market – to try do the ‘people’ one – so I’ve got some kind of choice of which I want to run with. Then on to ACMI to deal with the horrible assignment based around interactive exhibtions and other hideously tedious take a million notes because you have to hand them in things. That, or I’ll go to the Museum another Melbourne thing I haven’t made it to yet (did go to the old one a long time ago).

An early start for me, just wonder if I can possibly have the early night to match?