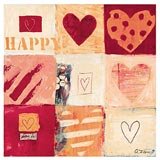 Bit hesitant to call this ‘the love post’ becuase by now 93.5% of you will have jumped to the wrong conclusion – having just posted a photo of Geoff and having spent rather a lot of time with him this weekend.

Sorry to pop your bubble, but this isn’t going to be full of sentimental jargon – which is something that so rarely comes from my mouth it probably wont be any real surprise.

This is a little about what God’s been shoving in my face. Some of it does involve Geoff but only in the fact that, as Sharon Payze (old teacher) said to me on the phone the other day, “Having someone new around really does make you understand a heap of stuff about yourself and about God” (NB: she was talking about her new baby, and it was just because she was after Laura that I talked to her in the first place, but I’m glad it happened).

So. My thoughts were all pretty screwed up last night in regards to God and his love and other people’s love and I guess just feeling pretty, ‘so not worth it’ and my head pretty startlingly clear about how I guess I find it quite hard to recieve love sometimes or even return it appropriately. Which leads to a whole ‘guilt’ thing about it not being fair to the person/God on the other end of the deal.

Yes. It makes a lot of sense. Love. Yes. I have thought about it. Yes. I know exactly that we can’t ever earn or don’t deserve God’s love. BUT it’s something that can wreak havok with my head at times. I can know know know with the grey matter but be really clueless about what’s genuninely going on.

I went to bed feeling decidedly shocking even after such a brilliant day. I contemplated at various points skipping church in the morning and just going off on my own somewhere. I didn’t in the end – mostly because I had to get Em and Han down there.

A huge thank you to Di for her sermon this morning. It hit the mark like nothing else.

She preached on the grapevine passage in John 15. To be honest I can’t exactly pinpoint what it specifically was, but that coupled with some of the prophesies this morning, sank in pretty deep.

There was also her curious story about being in the line at the shops and the guy infront not being able to use his card properly and how she responded – I had an almost replica exprience this week when I was buying petrol. I took the soft option and regret that I did almost immediately. It certainly made me pay attention to what she was saying.

It was as if I needed last night’s shaking up to make things tangible. A lot of it was/is about relationships between other people and myself and I am by far the better for having that argument or point where I just got overwhelmingly frustrated about where things were really at.

I find it exceptionally hard to make concrete a lot of what goes on in my head. It’s been a far messier, ‘reach that point’ and I guess a different way of hearing something pretty distinct about myself from God. Not a heap of, ‘hold it in my hands’ words or thoughts. Something that’s peaked and climaxed and crept up on me without me really noticing it. Something that’s been highlighted through circumstance and experience.

I’m not sure if I like doing things this way. It hurts more becuase it’s a lot more confrontational, but then I’m not sure if it’s something you could really get a grasp on if it all came through my head – because it has before and obviously never quite got there.

Still travelling. Still in that funny old canoe (see previous post). No paddle whatsoever, just drifting along with the current and hitting a few rapids.

Ha! Okay, maybe I should leave off the corny metaphors. 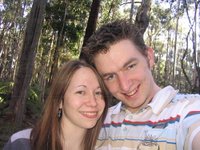 Had an extremely nice day walking km’s and km’s up near Steavensons Falls.

My knees are SO sore. Worth it though.