I really enjoy curious ways of meeting people. Today’s episode was no exception.

I had 10 minutes before work started at 5pm. So I grabbed a choc hot cross bun from the bakery as I was heading up and found a seat near some food place downstairs from work. I was there about two minutes and this Asian girl comes up to me, “Can you help me?”. She has a workbook with a fairly basic crossword and is pointing out the ones she needs. It turns out that it’s her son’s homework that she’s helping him with. She didn’t look that old, early-mid twenties. Her english was passable but not fantastic. So we end up doing some of the crossword which was mostly done and some word fill in the blank things. Weird bonding moment with a stranger.

I got her name just as I left. Michelle. She works at the asian food place right near where I was sitting. I hope I can remember her face so I can say hello sometime.

A couple of days ago I had a brief discussion with a friend about attractiveness.

“It’s pretty difficult to be unattractive, that equates with repulsion.”

And I asked, “Do you think then that we are programed to see ‘attractive’ a certain way?”

I’ve been thinking about beauty and attractiveness a bit as I have stumbled across a couple of articles and have been doing a bit of digging.

One being A Christian Vision of Beauty (Parts 1, 2, 3)by Albert Mohler. At one stage Mohler quotes Augustine and then goes on a little to explain it:

“It was you then, O Lord, who made them. You who are beautiful, for they too are beautiful. You who are good, for they too are good. You who are, for they too are. But they are not beautiful and good as you are beautiful and good. Nor do they have their being as you the Creator have your being. In comparison with you, they have neither beauty nor goodness nor being at all.” Augustine realizes that in order to see true beauty, he has to go to his Creator, and then, knowing the Creator, he may observe the creation and see that it does indeed bear the mark of its Maker. There is undeniable beauty in creation, but in comparison with the infinite beauty of the Creator, such finite beauty no longer has the seductive allure it once had. All earthly beauty is simultaneously validated and relativized by the contemplation of the beauty of God.

I wonder now if this person and I were having a conversation on two different planes. The attractiveness that I was refering to was around simply that, being pretty/handsome and his perhaps slanting more towards what is often refered to as, true beauty. Of course, it could just be a gender perspective thing. Do all males really find all females attractive in one way or another?

I can and don’t have difficulty the majority of the time seeing ‘the beauty’ in people. A good lot of my thought time on public transport often drifts that direction. People’s faces facinate me and it is rare, although I confess that it has happened, that I just can’t see something curious, beautiful, facinating, unusual or attractive.

“Faced with the sacredness of life and of the human person…wonder is the only appropriate attitude.” – Pope John Paul II

Humanity is beautiful. What I want to know is what makes one person prettier than the other? What induces females (and maybe males) to continue their subconcious or even very concious, I am x along the scale of attractiveness in relation to her/him.

What defines what is pretty or not? We can be dictated by the latest trends, by the media, by peers. It really irritates me that the media always has to come into this kind of discussion but unfortuntely I suppose it does play a rather large part.

We are so obsessed with our looks.

I was deeply concerned the other day when I watched a 9 or 10 year old girl who was opposite me on the train. She had an innocent little face. Her hair was boy short, she had a pair of massive silver dangly earings on – suitable for the evening wear of a 30 something year old. She spent the whole time admiring herself in the window reflection, preening when she thought no one was watching. Poking her hair behind her ears, pursing and wetting her lips. She was with her mother and her sister who weren’t peturbed in the slightest. It was a slight on the direction of humanity. I don’t think I’ve ever seen anyone act so vain, so concerned about their appearence. This was a 9 year old. It disturbed me.

I think the idea of beauty, of being beautiful appeal very much to females. A huge part of us wants that Geisha thing of being able to stop a guy dead in their tracks. If I can quote myself in that same conversation, “It would be kind of nice to know someone found you attractive even before they really got to know you, however superficial that sounds.”

Yes we should primarily be concerned about the person in their entireity. I think it would be extremely difficult to be one of those, “You could have any guy” kind of girls as they would find it more complicated in working out exactly why a specific guy wanted to be with them. *Insert some line on trophy wives or girlfriends here.* But to be honest I don’t want to be (and this is how it often feels like) one of those girls that, you always have to get to know first before they are found to be ‘beautiful’ or pretty or “quite attractive” etc.

“There have been other instances where i’ve gotten to know someone and started to appreciate them more.”

I understand that beauty as it should be is wound into the whole person. A bitchy, good looking female is not really all that beautiful. I find it difficult to explain this self image thing (it is a bit of that). Perhaps the underlying thought here is that say I were married. I wouldn’t want to just be ‘suitable’, ‘quite pretty’, ‘a bit of alright’, but absolutely perfect (as far as human flaws allow) for the hypothetical him.

I somehow don’t think we as females just want to be sitting on that level of, once known, are appreciated more. It falls short of what we’ve been programmed with. Yes we need to reconsider the meaning of beauty, but it would be nice sometimes to be appreciated on ALL levels.

That shallow enough for you?
Because welcome to the world of the female mind. 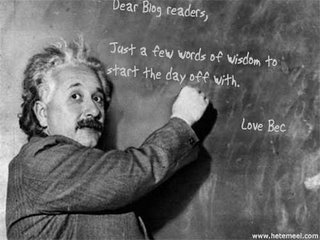 Yes I do think you might have noticed a new header image.
Please note that this is only temporary as I don’t think I like it too much. If I had the time I’d revamp the whole blog, and I shall some day. This is simply Rebecca stuffing around on now working photoshop doing such basic stuff you could cry. For now however, bed seems a better option, especially knowing I don’t have work until 5:00pm tomorrow which means hours and hours for potential sleep.