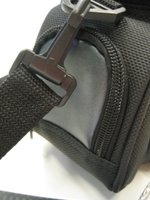 Wednesday as you might somehow know by now is my full load day. Today seemed to be overly focused (I nearly wrote ‘phocused’) on photography in some way shape or form. Normally I would love this, as to be entirely honest photography has been the stuff at uni I’ve enjoyed the most thus far. Still images was the ‘intended’ topic of the SIT tute (10-12pm) whereby we played around with digital cameras after doing a bit of talking. Yeah, not hard but kind of boring. Not slrs, just your average little happy snap cannon or whatever. I did take the photo on the left as my ‘contribution’ (ie: to show I was participating) which I was fairly pleased with, but a lot of it was just mucking around. I do like that tute though.

People wise, might be interesting to note a few of the mentionables. Firstly Jen, as I hang out with her a fair bit as she is another Interactive Media student and also in my Digital Photography lecture. You can sort of see her in this photo here… no not really, I’ll just leave it out. 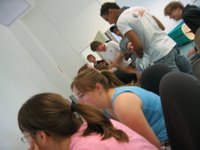 Anyway. We tend to hang around eachother. She’s easy to talk to and I dare say I’ll get to know her a fair bit more before the year is through.

The other guy (hardehaha) we hang round a bit with is Guy. Not sure how that all worked originally. But again, easy person to talk to. Share’s his chips ;P Really don’t know why he tends to hang round us, but hey he does. (Photo is of Studio class, as you can see I did not take it as that is the side of my head. Jen is next to me and well there are other people in the background.)

Also worth mentioning from here are; Justin, the mature age student (late 20’s?) talks a fair bit, likes to answer stuff and I’ve had a few conv’s with him around well erm multimedia type stuff. It’s nice when someone approaches you and actually treats you as if you know something. Um, Muffaro – who was the South African guy (3rd yr) that had me laughing my face off first class, he’s good value and Amilla, the Sri Lankan (I think :S) guy who smiles lots but doesn’t talk much – I think he’s only fairly recently come to Australia.

So to bore you more to tears (let me show you the pain of 7 solid hours). The tute that follows is for Comparitive Imaging (digital photog). Where I hang out with Jeremy who I’ve mentioned before and Zoe who’s a 3rd year Pro Writing student, she’s super nice and always late 😛

The three hour Still Images class finds me with Rebecca and Adina. There are now 4 Rebecca’s in that class of about 30. I shall probably hang around with Jerome’s Bec, but she didn’t make it today. I probably enjoy this interaction most as Bec’s a really cheerful kind of person and Adina’s pretty cool. But boy was that a long class this afternoon. At ‘half time’ about 80% of the class went and bought some kind of caffinated substance. I’m not kidding. Fantastic assignments though, so I can’t complain. And no I’m not kidding. Taking photos is not a duty.