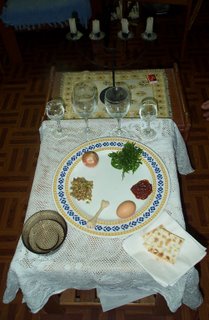 It is a little sad looking back on past years and a seeing a couple of ways in which this (and last) has differed. Something that I’ve really appreciated and have done probably about four times now in the past seven or so years is a Christian passover. I’m not going to use this space to explain what Passover is, if you are interested you know where to investigate and I’ll even help you out by pointing you in the direction of another blog’s explanation.
The photo on the left is of the sedar platter of the Passover we celebrated back in 2001 with the Mellows and the Carters. This one particularly stands out in my mind. You’ll notice (if I point it out) that the plate contains some creative versions of ‘what should be there’. It’s not the worlds easiest thing to locate appropriate items such as a lambs bone, as there aren’t really any sheep in the Solomons and imported foods are insanely expensive. We tend to do this ‘passover’ thing with family friends – it somehow ends up being always that way. The Mellows and the Carters are probably the haha most prominent families in this niche in the B’s lives. The 2001 time was a curious ‘last-time’ moment for me as we are now spread out away of where we grew up and where we ‘knew’ eachother.

Why mention Passover now? Well the 13th on the glorified Ferret callendar in the bathroom lists this as the when. Why are you celebrating it when it’s a Jewish ceremony and not a Christian one? I think it was originally introduced to us by Bob and Amy (the Carters), who’ve spent a goodly amount of time in the Middle East (before the Solomons). My mum has this book Celebrate the Feasts which explores the traditional Jewish celebrations in how we as Christians can incoporate them and use them to remember aspects of what Jesus has done and God’s involvement.

The parallels of the Passover meal to Jesus’s death, ressurection and the resultant redemption of humanity are striking.

It is Good Friday today. I confess I sometimes get confused about which day relates to which as the ‘good’ is initially vaguely misleading. I like that the ‘Good’ comes into the crucifixction which points directionally towards the amazing thing that Jesus has done rather than the somberity and brutality of the death. I like the fact that we (if we wear them or display them) use an empty cross.

I hate the comercialism of Easter and this has really only hit me this year. I dont’ want to see bunny ears or easter eggs or bilbies. I don’t want to know how much people spend on chocolate or books (surprisingly they do) or how much excitement goes into easter egg hunts simply because it’s ‘fun’. I do like how this very Jesus thing manages to stop the western world mostly in it’s tracks. An excuse for a holiday? But almost all the shops stay shut and clunk, the comercial world is frozen for a cool 24 hr block.

I don’t think I’m very good at ‘getting in the grain’ when it comes to comprehending what has been done for us. I was sitting in church this morning doing the ‘yeah’ thing, where I’m trying to grasp it a bit more but am finding it really difficult. I’d like to say I had this great revelation, but I didn’t. I know what Jesus has done and I wish that I could often feel more awed by it. I find it really hard to understand it in the ‘feeling’ means. I’m not saying I haven’t ever grabbed hold of it in that light before, I have, but not this time. Despite this, it was still a good time to remember what the crux (ooh theres a bit of irony) of it (life) is all about.

I was reading something in Matthew the other night when Jesus sends out the twelve (Matthew 10) and I came across this verse:

I think we sit in our churches and our homes and ask and ask to know God and I know I ask how can I love God and get a bit stuck. Being a Christian has got a fair bit to do with being ‘Christ-like’. I don’t exactly know why I trip over this, but to read ‘it is enough’ to be like him was really helpful. Perfection is a strange issue. I think I wind my mind to the point of ‘how can we possibly love God’ beyond simply recognising him? Doing the love thing as a Christian seems all directed at others. Really hard to explain but perhaps it’s a throw back to how we have been programed to see love. Love is all about feeling. No love is not all about feeling and it’s a good thing it isn’t.

I don’t quite understand what love is but I can see how it’s shown and nothing speaks more powerfully than the one who is love achieving the ultimate act of it.

“As the Father has loved me, so have I loved you. Now remain in my love. If you obey my commands, you will remain in my love, just as I have obeyed my Father’s commands and remain in his love. I have told you this so that my joy may be in you and that your joy may be complete. My command is this: Love each other as I have loved you. Greater love has no one than this, that he lay down his life for his friends. You are my friends if you do what I command. I no longer call you servants, because a servant does not know his master’s business. Instead, I have called you friends, for everything that I learned from my Father I have made known to you. You did not choose me, but I chose you and appointed you to go and bear fruitâ€”fruit that will last. Then the Father will give you whatever you ask in my name. This is my command: Love each other.” – John 15:9-17

And if you look back to that verse I mentioned previously, about servants and masters – how much more has God done in calling us friends! Although that does render what I mentioned before slightly less impacting. What a wide expanse of opportunity, how much more God has in store for us.