It’s curious (I do like that word) how God completes circles and brings you to a satisfying point of either completion or at least closure.

My entire last year had this massive background focus on ‘community’…

“My whole aim of last year’s YITS was to discover that community type thing again – fairly sure I’ve talked about that. Yet my biggest issue last year was in vulnerability, it’s bizarre, which reminds me, I never did share my ‘mid-year’ camp experience. Perhaps it was Gods roundabout way of letting me know there was more than being just a group of people that wind up together.”

I got a pretty good idea before camp (which is where I’ve been the past few days) that this was a little of what God was going to do.

“Maybe it’s that time where it’s all drawn together with a little closure for me, I’ve harked on about the issue for over a year now – longer. I hope that the up coming camp ends up being very ‘community’ orientated, in simply the way camps do. The closeness that comes on camps is desireable but I’d like it to be continued.”

Not so surprisingly much of this was on God’s agenda for me. Differently of course then I thought of how might play out.

I drove down to Torquay with Susannah in some very fine brown Melbourne sludge skies with roads to match. We get along rather well so it was not a chore in the slightest, a long way to drive but we were right. Had slight difficulty in finding the last turn off as erm, Susannah thought we’d gone too far when we actually hadn’t, but we still arrived well on time – there being no definite in the first place.

The place was little more than a glorified shed (but still really well set up) and was extremely drafty. Colder inside then out at some points. We had fires both places and wore about 8 layers of clothes a person, stomped round in ugg boots (which seems to be a commonality of both the girls and the guys) and squashed up on some ancient couches, chairs, the floor under sleeping bags.

Saturday morning turned out for me to be dealing with some of this ‘time/busy’ stuff and where God is on the priority list. Roz talked about the Kingdom of God and living life that way and sent us off to ‘think/talk’ to God about what might be hindering us. Time was the big fat obvious one for me. Others shared things from status to success to career. I came across Ezekiel 37:15-28 which is a totally obscure passage about a prophesy but God threw something infront of me that highlighted some relevance.

A fairly relaxed afternoon. After lunch most of us took off to the beach for a wander, kick of the footy. Susannah, Evie and I walked the length of the beach. S and I came with Tim (IT Tim) and Geoff and so stopped to get a huge ammount of sparklers and tape on the way back.

There were some issues with a gas leak and the place entirely running out, so having to go to the lady who run’s the place’s house to use their oven to cook the lasagne (dinner). This also meant no hot water. Showers were again offered by Linda (the lady who runs it) even though it meant trecking into her house to take advantage of it.

Peter D came up to do something for our evening time. We started talking more about the Holy Spirit but ended up talking about events>beliefs>behaviors and this is where I dealt with some of that ‘community’ stuff and left over junk that I hadn’t fully let go of around leaving the Solomons. I was a bit surprised to find I hadn’t totally dealt with it but God is gracious and seems to provide opportunities to bring to mind what we miss.

Evening that followed = Tim’s sparkler bomb that wasn’t quite as spectacular as it could’ve been, fireball soccer which fell apart after a fairly short while but was quite amusing all the same. I didn’t join in this one as I had one pair of shoes with me and didn’t exactly want to melt them. A game of spotlight out in the paddock. Don’t know how many cowpats we collectively lay on. A goodly ammount of talking and laughing. 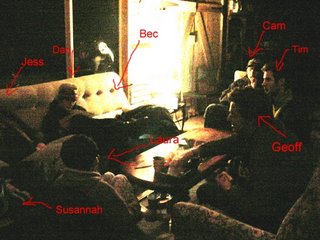 Then the descision was made to play Canasta – which is a card game. I tracked down all who knew the rules: Geoff, Dan, Tim (IT), Laura (she came up late) and we pulled in Cameron as an extra. Everyone else went to bed bar Jess W and Susannah who stayed up to watch. So Laura taught Cameron, and Dan told us all about this ‘proper’ rule about wild cards and the first play. After three rounds, this rule had left Geoff and me (team game: Laura & Cam, Dan & Tim, Geoff & me) with -900 something points (that’s right, read NEGATIVE) so I pulled the rules out and made Dan read them – he couldn’t find it. We played until about 3am, which was around when I finally woke up. I decided the 7 or so hot drinks I’d had that day had finally kicked in. No joke – actually there were quite a few being made, I think I just warmed up to being myself around some of these relatively new people.

I love how God has turned all these changes into what it is now. I love this bunch of people immensely, they are all rather diverse but a quality group. It’s remarkable that when you go chasing something like community and you lament what you’ve lost that when you and others have been seeking God on it that he doesn’t just let things go and slide, yes I had to wait but I was given a transit community (YITS) and people there to push me along and now things are for the moment right. It is good.

A funny, slow, change process and a horribly long winded discovery of what community is and the expression of it in it’s many different forms. When it is truly community you know, you can see God at work and there is this banding together that is not entirely natural.

Three of us also got ‘floured’ – thanks very much to Dan and Cam ie: in my shoes and my ugg boots, I was by far the least worst hit and seemingly an after thought as my only ‘retribution means’ was some disliked card play. Jess copped a faceful by night due to the ‘ham slapping’ incident earlier in the day and Izzy got a handful during the day, due to her cooperation or simply because she got angry at them flouring Jess.

You’ll also see that the arrow pointing at Bec in the thoroughly lightened photo is where I had made it warm shortly before, I had not disappeared into the pile of sleeping bag on the couch or into the white light (of the projector we were using in place of the fluro), I was shockingly taking the photo (this being the 3am set up.)