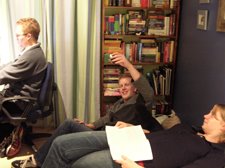 Sam got down here around 5:30. We pottered around for a good while and I started making dinner as soon as Mum got home with the few things I needed. Burritos, nice and easy, Sam cut everything up and I did the meat etc. It’s a funny thing getting me in a kitchen sometimes, I’m probably a bit too, ‘whatever goes’ when it comes to food. However it worked… Sam’s desert 😛 well that’s another story (yeh hurt me later). Set the table and what not, then we bummed around my room for ages and estimated 6:30-7:00 for Jas and Paul to get here.

7:00 passed and I lay on my bed complaining now and then about being hungry while Sam took over my msn. Laura went ahead and ate. I decided if they weren’t here by 7:30 I’d go ahead and eat. They just made it.

Took a trip to Sky High (top of Mt Dandenong) to take a look at the lights. Dropped by Reinhards on the way up and managed to score another person to fill the car. Payed the $4 for not the worlds greatest view. Few too many lights up there and the sky was a bit smoggy. I decided Bourkes lookout was in order so we drove there after a slight detour and a glance and a half at the Melways.

It is entirely necessary in my opinion to take the shortcut (you have to walk a bit from the parking area) so I led the scramble down the hill in the dark, no torches and I was doing it from memory having been there once about three years ago. We sat and looked and talked for quite some time. The drifting smell of smoke coming from what I don’t want to know about wasn’t so pleasant but the drunk J (who I know of, from school) and his mates didn’t hang around too long. Unfortunately the best lookout on the mountain (known of) does tend to attract such and other behaviour.

A good evening. It was nice to opportunity to catch up with Jas again seeing as he’s on the other side of this very large island most of the time.

And now I’m exceptionally tired. One of these days I’ll blog about something more than just my day. What do you want to hear about?