Road trips and the expense incurred by impulse

I succumbed yet again to the temptation of spending money on books. I earn money by books, I loose money buy(sic) books.

After a long sleep-in and a relaxing morning where I had another really good sit/think fest, yet this time there was more ‘God’ related stuff involved an interesting tour amongst the start of Proverbs, I found myself having to drop Emma (Emily’s friend) home. Now she really doesn’t live that far away but as I was ‘on the road’ I figured I’d just drive the extra however many km’s to Nunnawadding while the 20% sale was still on at Word.

Foolish girl. I was going to stay home today.
Paul D called me sometime during then ‘for a chat’ which was quite random. We are having a rather large gush meetup tomorrow which shall be nothing short of interesting. I will see him, Jas and many others I dare say.

So I bought far too many books again. A very interesting one on ‘Mass Culture: eucharist and mission in a post-modern world’, some book by Max Lucado, some Youth Min one, One on online stuff (as it was less than $5 and erm I was being impulsive) and The Five Love Languages of Singles as someone – I think it was you Tony, said it was really good.

Anyway. I think the whole trip was a cover up to just get out of the house for a while – not that I have been at all frustrated with anyone today, positively the opposite.

How very stupid of me. I now have books enough to last me months – there’s still some I haven’t read from last time…

Young adults last night was nothing short of interesting… if I can describe it like that. The majority of us were under the impression that Sussanah was ‘running’ this week in starting to look at Jesus’ ministry through the gospel of Luke. She didn’t show.

James and Tim (not IT Tim) grabbed at the loose straws of the evening and we all proceeded to have a look at part of chapter 4. particularly this bit:

16He went to Nazareth, where he had been brought up, and on the Sabbath day he went into the synagogue, as was his custom. And he stood up to read. 17The scroll of the prophet Isaiah was handed to him. Unrolling it, he found the place where it is written:
18″The Spirit of the Lord is on me,
because he has anointed me
to preach good news to the poor.
He has sent me to proclaim freedom for the prisoners
and recovery of sight for the blind,
to release the oppressed,
19to proclaim the year of the Lord’s favor.”[e]

20Then he rolled up the scroll, gave it back to the attendant and sat down. The eyes of everyone in the synagogue were fastened on him, 21and he began by saying to them, “Today this scripture is fulfilled in your hearing.”

22All spoke well of him and were amazed at the gracious words that came from his lips. “Isn’t this Joseph’s son?” they asked.

Discussion got (to say the least) a tad tense at times, I don’t know the whole start of the evening had a very awkward flavour. I was close to walking out at one point, not that I mind a bit of conflict but I was getting supremely frustrated at how things were tangenting quite wildly.

We didn’t pray to start with. That was a problem. Something a couple of us noted earlier (to ourselves) and didn’t speak up about…

We eventually managed to, I hope get something out of it. I confess much of the time my head was stewing over the word ‘gracious’ (v.22) for some reason or other. I think I was trying to work out why that word is used there. I didn’t bring it up, because I know my head likes to play with semantics and it probably wouldn’t have gotten us anywhere.

Some good points made (somehow) or at least things we discussed:

my notes are very scrawlly and all over the place – as was the discussion really.

The gracious thing made sense a bit more in light of looking at God’s character. And I had some minor revelation about it – unfortunately I’ve sort of forgotten it. How irritating.

Anyway. After it ‘got there’ somewhat, concluded. We stopped and did a recall, prayed and then Tim and Isobelle ‘ran’ communion. Armed with a guitar, Psalm 51, Tim’s voice (for a little), bread and some juice, a lot of time of just being quiet and reflective. It was a fantastic way to finish the evening. It was so nice just to stop.

Communion at Vineyard is a very ‘communal’ affair – in many ways it should be. We get up from seats rather than pass bread and cups along the row. Certain individuals give you the bread/cup etc. But there isn’t a lot of time to be quiet or sit and reflect. A bit yes, but not a lot.

I am hoping communion is something we will seek to do weekly. James was pretty pumped afterwards with some ‘idea’ he had about doing it next week.

Macca’s. Pretty enjoyable as always. Tim mockingly asked me on an ‘argument date’ (he liked the concept or something) – I refused, but said he could buy me coffee next Macca’s trip and I’ll sit and argue something with him if he so desired.

Fred the Red Car was moved on an angle and ‘Bad Parking’ written on my back window.

Trip to Koorong today – on impulse because Sam and I were both a bit bored. I bought an earlier David Crowder Band CD, Illuminate. If I were to recomend one of their cd’s that’d be it. It’s really good. Better than their new one. Also got WOW worship aqua (just mixed stuff), nice to have some new stuff, tad annoyed as they’ve stuffed up the track listing on the second CD so when you rip it to your computer – well, lets just say I’ll have to retitle them sometime. Not impressed.

Hannah got back (after two weeks of being away in Central Australia on a school camp) tonight. I went to pick her up with Mum and Dad and spent half an hour waiting, freezing in the car trying to fall asleep to loose my headache. It’s good to see her again. I can’t believe it’s been four years since I did the same camp. I said hi to Mr. Youl (my Texts/English teacher) and got a really good hug for it… Nice to know I’ve been missed 😉

Spent a long time tonight doing nothing. Listening and lying on my beanbag, half praying, mostly thinking. I haven’t done that for a very long time. I should do it more. 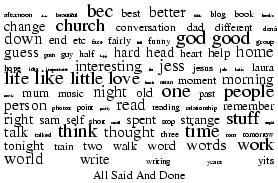 And would you look at this, it’s a word cloud from my blog. They are intended for tshirts but why not put it on here. I am slightly mistified at the presence of the word: donÃ¢…

I pinched the idea from Craig’s blog.

the thing is slightly off it’s rocker but minorly amusing. Shows how much I talk about myself!

I shall keep amusing myself by continuing the trend of my blog posts seemingly appearing in sets.

By way of explanation:

Until now it (and I promise) has not been intentional.

I’ve spent the last hour and a bit putting up books on ebay, to fund the too many social activities that shall arrive on my doorstep these holidays, also petrol and a good bit will, as it always does, get saved. Unfortuantely my savings tend to take a nose dive when I ‘buy that big thing’ – but really that is what savings are for.

Next on the ‘to buy’ list is a Digital SLR, do yourself a favor and don’t get yourself an expensive hobby. Moving out of home would also be nothing short of wonderful yet this presents a problem, now that I work from home…. this home. I think I’ll cross that bridge when it comes to it. Give me til the end of the year and I will probably strongly consider hunting for work and the slightly detestible nature of not being my own boss.

Money as a whole does not greatly concern me. Although the wasting of it does.

One thing I will probably spend money on this holidays is a trip into the city to look at the Picasso exhibition, tempted to go by myself but anyone is welcome if you are so inclined (and I know you).

I am slugging my way through ‘Lake Wobegone Days’ and getting mildly frustrated that I ever started it. It’s too long for what it is. Difficult to follow, although quite funny – it feels like a million anecdotes from multiple characters pieced together to form some kind of whole. I’m questioning why I didn’t just start reading The Life of Pi when it’s been on the ‘next’ list for so long. I shall endeavour to finish it asap, which might be a good task for this afternoon.

Here is a list of some of the picture books I was slightly obsessed with when I was younger:

And some early novels…