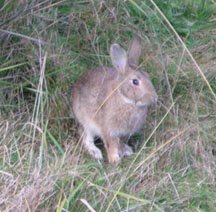 Laura and I got home last night after going to see Oliver Twist with Jess and Sam and came face to face with this rabbit.

“Why is there a rabbit in our drive way?”

So we got out, I worked out it must have hopped into our backyard so I closed the gate.

Dad came out armed with some lettuce and he and I spent the next 5 or 10 minutes chasing this stupid rabbit (obviously a pet one) around the yard.

It was eating at the food but got away from Dad. I managed eventually to grab it from behind and we returned it to our unknowning neighbours across the road. Their girls were very happy that Smoky had been returned to them.

Oliver Twist – gets about a 6-7 out of 10. It was good but not great. There was nothing much new bought to the story and there were several points where I was highly concious of it being well, on a set and with extras. The kid who played Oliver however was magnificent, and both Nancy and Bill were done fairly well. Glad I got in for free 😉 Got to love having a friend who works there.

I am now in the mood to read more Dickens and badly want to watch David Copperfield again (which is the best BBC or any adaption of a Dickens story ever if you ask me). If I’m not wrong, I think we have it taped and somewhere in the stash.

Went and got my eyes tested this morning. They are worse – I knew that, I should’ve also checked how much, I dare say I’ll find out. No new glasses for me however, I could have but I’m trying out contacts, and for the moment my old/now glasses can do me. I don’t have that much money to throw around. So I’ll find out how they go in a week or so. She also wants to do a (pupil?) dilation test on me due just as a ‘checkup thing’ because yeah, my eyes suck. Which means someone else has to take me whenever that is because your eyes are way too sensitive to light after they’ve had the drops put in them. Something like that anyway. Oh the joys of my genes and the abuse I inflict by sitting in front of this screen too long.

*heading refers to a dumb song on the Watership Down cartoon which was also crap, however I VERY much liked the book when I was younger and it’s got a lot to do with Rabbits. I think it’s just about all about rabbits.
**the photo is of a rabbit we came across while down at the lake the other day.