I was going to spout some almighty backtrack, but I got caught up in the Tod Russell and Brant Web (those two miners) interview on Chanel 9. Quite facinating. Now all we have to do is wait for the movie, the books, the commercials… it is now past 10:30, and I have an annoyingly sore/thick throat. I so wish I did not have to go to uni tomorrow – and I still may not, but I have to work out when I’ll be able to get hold of a video camera to shoot about 30 seconds of necessary footage to prove I can. The class, although compulsory will be yet another documentry if I’m not wrong and I think I can afford to miss at least one more. I shall see how blergh I feel in the morning.

So as for, ‘spouting some almighty backtrack’. I wont subject you to too much detail. I will however say something or it means there will be gaping holes in the record should I ever chose to look back, which I do occasionally. Laughable really. Oh well, it is my blog, my sleep time and I guess I can sacrifice it how I so choose. If you read it you do. If you don’t, well – it’s not a huge loss. I do hope I can keep it to a half interesting ramble.

So, Friday was well and truly full. Iain, Sam and I joined Jess for a falafel lunch – which was quite good once drenched in other stuff, and then got the train into Camberwell.

Walked from the station to the Rivoli (Cinema) to see Water, I had no idea what I was getting in for, except that it was an art housey film. Very, very powerful. There were several people crying by the end of it and I was very close to – which can take a bit. Very unhollywood a movie. I find out later that it’s the third of a trilogy and very controversial with Hindu fundamentalists, which is quite understanding considering the content. If you can get to one of the limited places it’s being shown, do bother – it’s fantastic, quite disturbing and very moving.

Met Laura, then stopped by Dick Smith in the city to catch Ben (Yits) and managed to lose Iain for a good 15 minutes. We met the boys (that being Dan, Cam and Jerome) at Southbank. Grabbed some dinner and ran into heaps of other people from church that were also going to see Robyn at Top Acts. You might as well know it Dan – I’m pretty sure you read this. I was rather unimpressed with the three as they wasted money on three beers each before we even went in.

We had excellent seats on the front of the balcony. The music wasn’t as impressive as last years Top Acts but the drama and monologues were better. I came away with the distinct impression that everything picked up after the intermission. Robyn’s was brilliant. Despite the music lacking somewhat – there were two guys, one with a pretty normal guitar and one with a lap guitar that… well! Jaw flooring talent.

Wandered towards the Casino afterwards but didn’t stop long as I realised we’d miss the last train. So home again home again, amusing train ride home complete with ‘the quiz’ from well, probably the MX. I had my car at Ringwood Station and ended up giving Dan (bongos) and Steve a lift back. Slept the night at Jess’s.

Caught up with Ana and Natalie (and Sam) for breakfast at Maccas. I was none too awake.

zone zone ramble zone zone… I’m sitting in bed (good old wireless) with the electric blanket on and I’m getting sleepier and sleepier. 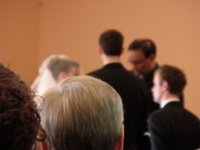 William and Claire’s wedding in the afternoon. The sound system died as she started walking down the aisle :S the fast acting piano player took over. It was a very nice wedding, quite traditional maybe not exactly how I’d do things. The vows were just the standard – I think it’d be nicer in a way to write your own.

(Photo-wise, I had a terrible seat. The church was packed and we were near the back behind a lot of people) this (see left) is about as good as it got. 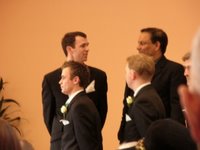 I really didn’t know the bride at all, but the groom and his family have been friends of ours since before Laura and I were born. Jo and Elyce know them from beachmission, it was a pleasant surprise really as I didn’t think they’d be there. Had a bit of a chat to Jo and quite a lengthy chat to Elle. I really should make some time to catch up with her – feel like I only got to know her a tiny bit last year and thats been a bit of a loss. Also saw the Blythes, the Wingers and a few of the Adneys (which was weird after church messiness).

I was sitting in the car on the way home and after talking to Elyce about being sensible I guess when it came down to ‘doing to much’ and I realised just how stuffed I was. Sore throat and utterly exhausted. Decided to give Alecia’s 21st a miss. And had a very relaxing/valuable time alone at home with a book or two and a chat with God about some very onhand stuff.

And that was enough of a boring verbal blah to remind me that I should definitely be asleep.
Congratulations if you got this far without skimming.